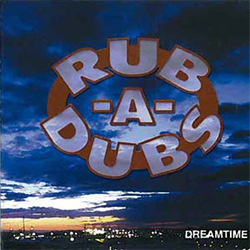 This album was recorded during the autumn of 1998 and spring of 1999.
Torgeir "Togga" Gundersen worked as producer and he did a great job in a former bombshelter named "Badger" (Grevlingen). Togga made up a lot of the equipment himself and there were times we all thought we would be blown to bits or burned in a furnace when some of the cables made strange sounds and gave off alarming wisps of smoke.
Our trombone hero, Arne Kolstad had to play his parts in a barren and freezing corridor, singing was close to electrocution and we generally had a great time recording and mixing.
The title of the album was taken from the aboriginal concept of the timeless eternity that surrounds conventional time. The land from where myth, dream, gods and all that exist emerge. In other words a kind of pagan way of looking upon the world. The playing tried to weave this strangeness and the mixing was always with this in mind.
On the track "Spooky" we sample dramatized bits of sound from a witchburning.
"Peacemaker" is our contribution the the mass of songs showing a love for the movieworld of westerns, a genre idolized in Jamaica during the sixties. A lowly murmured conversation between some of our western heroes can be heard as they carry a coffin to it's final destination. The tune started out as a ska, but our bassplayer, Arve Hinderaker, suggested that we slowed it down and then came up with the bassline, which was played on the actual record by Arne Jacob Hidle. This fact due to Arve having to leave the group when his wrists pained him too much for playing anything.
"Fujiyama" contains the voice of a Japanese student who wrote this poem to communicate her longing for the holy mountain of her childhood.
On the final track, "Rub A Dub Style" we all contributed to make this an ominous invitation to take an unusual route to the light on the other side of darkness. One of the defining moments in our recording career, as I'nI would say.
Reception for this album was celebratory and it was rated as an achievement for norwegian indie music. We remained on the fringes of the media though. Perhaps both due to the chosen style and our lack of likeness to the "real thing" being played on Jamaican records.
This one set us on our somewhat lonely course and is still fondly remembered by our loyal supporters.

Arranging:
All members of Rub A Dubs.